Ierapetra is the only town on the southern coast of Crete. It is a prosperous agricultural center with long stretches of beach on either side. The people live off fishing, vegetable growing, and tourism. The town’s strong oriental flavor comes from its maze of alleyways lined with single-story houses, which must have been owned by Muslims once. There are flowers and greenery on balconies, windows, courtyards, and gardens.

The town’s other attractions are its Venetian fortress and 18th-century mosque. The waterfront is lined with tavernas. For a luxurious dip in the sea go to the east of the town, or hire a boat and head for the coves and rocks nearby. An interesting excursion is to the banana plantations and orange grove of Mirtos.

Rethymnon lies 78 km west of Heraklion. It is a charming small town, with a history that goes back to the 4th century B.C. It flourished mainly under Venetian rule when it made fantastic headway as the arts and learning are concerned.

The Venetian touch is still prominent in many parts of the town, best seen in the narrowness of the streets, the old mansions, and its fortress, known locally as the Fortetza. Two interesting sights nearby are the Monastery of Arcadi and the Preveli Monastery.

In the background behind the town towers the snow-capped Mount Psiloritis or Idi. The town itself looks on to the sea and two harbors, one small and pretty, the other big and bustling with activity. It is still a pleasure to walk along the narrow, white streets of Rethymnon gazing at the marvelous mixture of architectures.

More Important, there are several good hotels in and out of town, beaches, flowers, and woods, set against an enticing mountain background. The historical Arcadi Monastery is only 23 km away along a scenic route. The monastery has been restored since 1866 when it was burned down along with some 1,000 men, women, and children who had sought refuge in it from the Turks. It is now a venerated symbol of Cretan independence and the holocaust is celebrated each year on November 8th.

The old town, next to the sea, with its tall handsome houses and narrow streets, retains much of Its Venetian character. At its center rises the “Kasteli”, a Venetian fortress.
The new town is pleasant and lively, with large and modern houses which stand in gardens filled with flowers all the year-round, in its outlying districts countless orange groves fill the air with their aroma during orange blossom time. Several roads lead from Chania to the various beaches in the vicinity and inland regions, as far as the shores of the Libyan Sea.

Chania is Crete’s capital and administrative center, with some 50,000 inhabitants. It has little archaeological interest but holds the tomb and house of Eleftherios Venizelos, the great statesman, and Crete’s most illustrious son. Also of interest in Chania is the vast naval harbor of Suda Bay. Above Suda are the remains of ancient Aptera.

Crete’s southern shores are rugged with high cliffs rising sheer and grim from the sea. In between, there are several long stretches of beach and fishing villages full of solitude and isolated splendor.

The ruins of this once splendid city lie high up on a hill above the modern town, overlooking both the Corinth and the Saronicos Gulfs. In fact, ancient Corinth owed its power and wealth to this advantageous position between two large harbors, Lechaion in the Gulf of Corinth and Kechreae on the Saronic Gulf. Corinth… 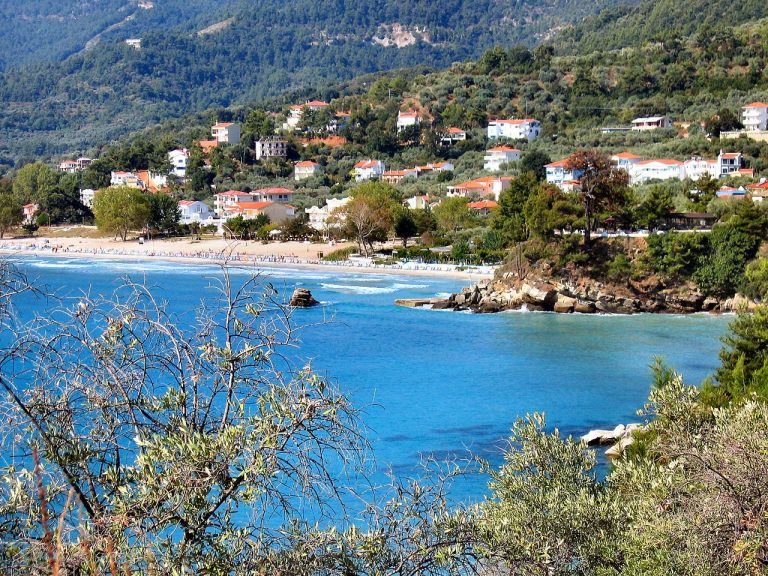 It’s a common knowledge that Thassos in Greece have so many beaches ( Paradise beach , Golden beach Thassos , Makriamos beach … ) it would be too hard to count all of them. It is a paradise of its kind, and we assure you, that you will find something for your taste, even if…

The museum stands in the southeastern corner of the Acropolis and houses priceless archaeological finds kept in chronological order, starting with the Archaic ( 800-600 B.C. ), and going to the Classical( 500-400 B.C. ), Hellenistic ( 300 B.C. ), and Roman periods. Among other outstanding works of art housed in the Museum’s 9 rooms…

Archaeological Museum, XANO ( YMCA of Thessalonike ) Square, is on 6 Manoli Andronikou Street.Among its exhibits are architectural fragments from the Archaic temple of Therme, finds from the excavation at Sindos, the amazing and unique treasures from the royal tombs of Vergina, and finds from the tombs at Derveni and the areas around Thessaloniki,…

KASOS This tiny island, almost nudging Karpathos, is 17 km long and about 4 km wide. A mountain range extends the length of the island and the south coast is almost inaccessible. On the northern side, several small villages are clustering around the island capital, Ophrys. Inland is a fertile plain. Access to Kasos is…