historical sites in greece by tour-europe:

The dawn of Europe’s history, when the kingdoms and empires of the Oriental civilizations rose and fell, begins with the arrival of the Greeks. The first slow stages of the climb from primitive culture to the heights of civilization began in the Aegean area during the Bronze Age (2800-1100 B.C.). It was an age of trade and communication between nations, peaceful on the whole, but with interludes of savage warfare.

The Aegean area was the key position for all trade during the 2nd and the 3rd millennium B.C., between peoples coming from the North, Asia Minor, and North Africa. The whole of the Aegean Civilization was based on sea power and commerce. The ancient world brought its trade to the islands and coastal regions of the Aegean, and the wealth of the inhabitants increased accordingly.

Crete was in constant trade communication with the rest of the Aegean, where independent little civilizations arose, of which the most notable is the Cycladic. The Cyclades group was too small to support a large population, but their mineral and metallic wealth, added to their geographical position, gave the islands unusual importance in the early Bronze Age.

Depending then on the region where the Aegean Civilization had developed, and on the particular features of its remains, they are now called Minoan, after Crete’s legendary King Minos; Cycladic, for the group of islands which lie roughly in the middle of the Aegean Sea; Mycenaean, on the Greek mainland where Mycenae stood-the strongest city of the time according to Homer. Lastly, there was the Trojan Civilization in the regions of Troy, to the North-west of Asia Minor.

The Bronze Age ended everywhere sometime during 1100 to 1000 B.C., when the last wave of invaders from the North, the Dorians, came down to Greece. Their advent dealt the final blow to the Mycenaean Civilization.

The Dorians were a warlike tribe, but they brought with them the Iron Age and a civilization that exercised an immense cultural influence. Meanwhile, at about 1000 B.C., the Pelasgians and Ionians left the Greek mainland, under pressure from the Dorian invasion of the Peloponnese. They crossed the sea and settled in the North-Aegean islands and along the coast of Asia Minor.

The Greek colonists had a genius for settling in the right spot, and a good eye for places with commercial possibilities. Great cities grew on the Asian coast and on the islands, and by the 7th and 6th centuries B.C. they were centers of brilliant civilizations. They were in contact with the great civilizations of the East, and they brought to this Eastern culture Greek vigor and freedom In size they far exceeded most of the cities of old Greece, and their civilization was richer and finer, except perhaps for that of early Corinth.

The galaxy of rich and powerful cities included Clazomenae, Halicarnassus, Colophon, Smyrna, Phocaea, Samos, Ephesus, and above all Miletus. They were the cradles of science and philosophy, the first triumphant flowering of the individual city-state. Thought was free, and the human spirit found itself.

Men had found their freedom and so had leisure to reflect, to reason about the purpose of life, the aims, and ideals which give vitality to civilization. But the tragedy of these independent and flourishing states was that they were too individualistic. They even lacked the power of combination against a foe, and so they were doomed to fall under the domination first of the Lydians and then of the Persians.

But in their short centuries of freedom they had time to do great work: they helped to open up the Mediterranean and the Black Sea to Greek civilization. Greek colonies sprung up from the western Mediterranean to the shores of the Black Sea, and the seeds that were to transform the whole outlook of western man had firmly taken root by the 6th century B.C. The end of this period saw the emergence of two rival powers-Sparta and Athens.

Starting with Homer and his ballads of the Iliad and the Odyssey, Creece burst forth into a new era of rapid progress which led to what is now known as the Classical Age ( 500-323 B.C. ). It is this period that has left the most important monuments and relics, and which set ideas and principles which hold good to this day.

This «Golden Age» was at the same time the most turbulent. There was internal strife as well as invasions. Thus in 490 B.C. Greece suffered the first Persian invasion but thanks to the efficiency and capabilities of the various Greek armies, particularly of Athens, the Persi and hordes were repulsed at Marathon, where the Greeks won a great victory.

The period from 480 B.C. to 431 B.C. was dominated by the brilliant statesman Pericles who initiated the great building schemes which included the Parthenon and the Propylaea on the Athenian Acropolis. Externally the empire of Athens flourished as reluctant allies were forced to obedience. Internally the radical democracy was based on a popular assembly open to all and on a panel of “generals” elected annually by vote.

Athens was at the time filled with architectural gems, and was also the center of culture, welcoming all that was new in science, philosophy, and art. For more than half a century it enjoyed political supremacy, but its significance in western history arises from its many-sided activity of thought, art, and life.

The Peloponnesian War ( 431-404 B.C. ), which heralded the decline of Athens, came as an outcome of Spartan fear of the power of Athens. The great plague in 430 B.C. and a fatal disagreement over strategy after the death of Pericles in 426 B.C., finally brought Athens to her knees, and under the oppressive overlordship of Sparta, the trivial quarrels of the Greeks almost achieved what the might of Persia had failed to accomplish, so that the history of the West was in fact, staked on the issues of Marathon, Saiamis and Plataea.

Weakened by the long war, the 4th century B.C. saw all of Greece threatened by the new power of Macedonia, Many eminent Athenians preached alliance, but the stronger voice of the greatest Athenian orator, Demosthenes, led Athens to resist Macedonia.

This led to the disastrous battle of Chaeronea in 338 B.C. The fortunes of Athens and several other city-states were now those of Macedonia. Their days as important independent cities were ended, having failed to achieve unity as a single nation, even though there was a common language, worship, and way of life from the Ionian Sea to the shores of Asia Minor and from Crete to Macedonia. 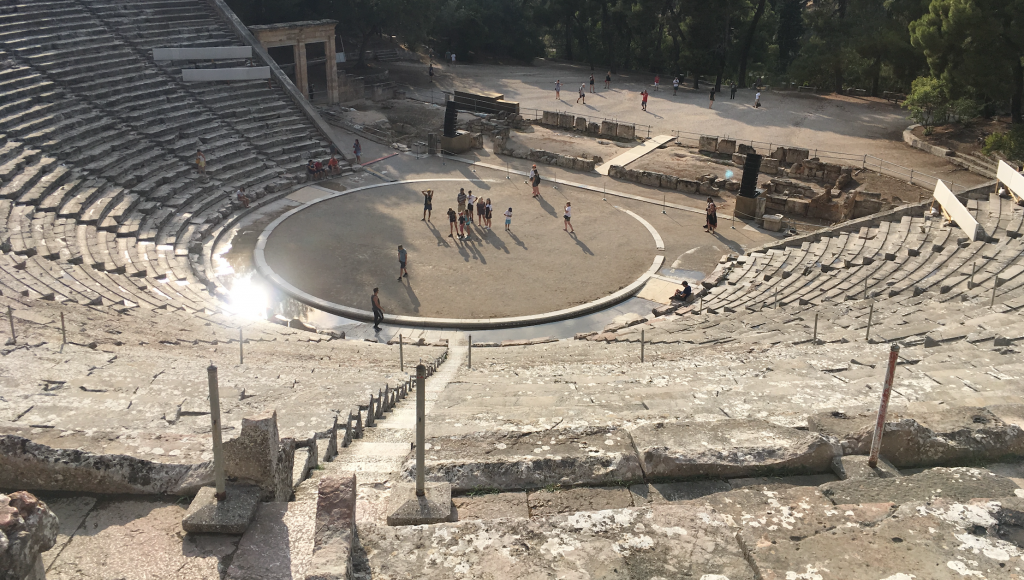 History had to wait for the advent of Philip of Macedonia to take advantage of this lack of unity and subdue all the Greek cities south of his own kingdom at Pella. A single nation then emerged in an elementary form under his rule and, shortly after, under the rule of his son Alexander the Great. The period from the 4th to the 2nd century B.C. is known as the Hellenistic Age.

When Alexander died in 323 B.C. he was the ruler of a large Empire and the nation had become known as Hellas. But quarrels among his heirs and various independence movements weakened the Empire until finally, it broke up. Greece then passed under Roman rule. The quality of art declined in favor of quantity and size, but the Romans were also great aqueducts builders of public works.

It was then that Greece acquired its first roads, bridges, and public baths. In their art, however, they were monumental extroverts, tending towards the massive and ostentatious, embellished with triumphal arches, graphic reliefs, and frescoes, and almost always commemorating a Roman victory.

The outlook of the Greeks of the pure Classical period was order and proportion. The sculptors sought the ultimate perfection in subject and execution and seldom fell short of it. Mere size did not impress them. They had indeed some mighty monuments, but in them too, it was in form rather than in bulk that they sought perfection.

Even during the Roman domination, the Greek city-states retained their preeminence in philosophical studies, the fine arts, and science, and while Nero hauled the monuments of Athens to Rome, the violet-crowned city of Pericles remained the “University” of the Roman Empire.
The Roman period ( 146 B.C. to 138 A.D. ) also saw the advent of Christianity in Greece. St. Paul preached on Mars Hill In Athens and in other parts of the country, and a generation later St. John wrote the Revelation on the island of Patmos.

When the Roman Empire was divided into Eastern and Western Empires, Greece remained part of the Byzantine Empire which was so much influence by Greek thought and culture that Greek became the language of official affairs, replacing Latin. The Byzantine Age ( 395 A.D. to 1453 A.D. ) lasted 1000 years.

This also developed its own art, literature, and customs, all of which were strongly influenced by the strong ties between the State and the Church. Church architecture developed the well-known Byzantine type of cross-transcript with round dome, and the Basilica type of church with the higher center aisle and one or two aisles on either sidelined by pillars and columns.

Mosaics and frescoes in churches developed to a high standard during this age which came to an end when the Ottoman Empire conquered Byzantium in 1453.

With the fall of Constantinople, capital of the Byzantine Empire, in A.D. 1453, the Turks ruled most of Greece, and scholars, writers, and thinkers fled westward with their precious manuscripts and books. This was the factor that gave rise to the great Renaissance period which, in turn, influenced western culture.

Earlier in its history, the Byzantine Empire had to condemned by Catalan, Frankish, and Venetian armies who plundered Greece under the pretext of crusades or other purposes.
Greece remained under Ottoman rule until 1821 when separate revolts merged to become the Greek War of Independence ( 1821-1834 ).

Modern Greece begins with the overthrow of the Turkish yoke. The country was recognized as an independent state by the Great Powers ( Britain, France, and Russia ) in 1830, and the first monarchy was set up under King Otto of Bavaria.

For several decades afterward, the Greek nation strove to bring under its wings areas that had always been inhabited by Greeks. The most recent acquisition of such territory was the Dodecanese Group of islands. They were united with Greece during the Second World War.
This small country with a long history, a country that has always fought for the great ideal of freedom, is today set on a progressive course and can point to a solid endeavor where the development of her national life is concerned.

By reason of its geography, the spirit of the people who compose this country, and its position in the Eastern Mediterranean, Greece has taken on an enduring character which makes each generation of Greeks dependent on their forefathers and pledged to their descendants. Therefore, the State which is unanswerable for Greece is in charge at one and the same time of yesterday’s heritage, today’s interests, and tomorrow’s hopes.