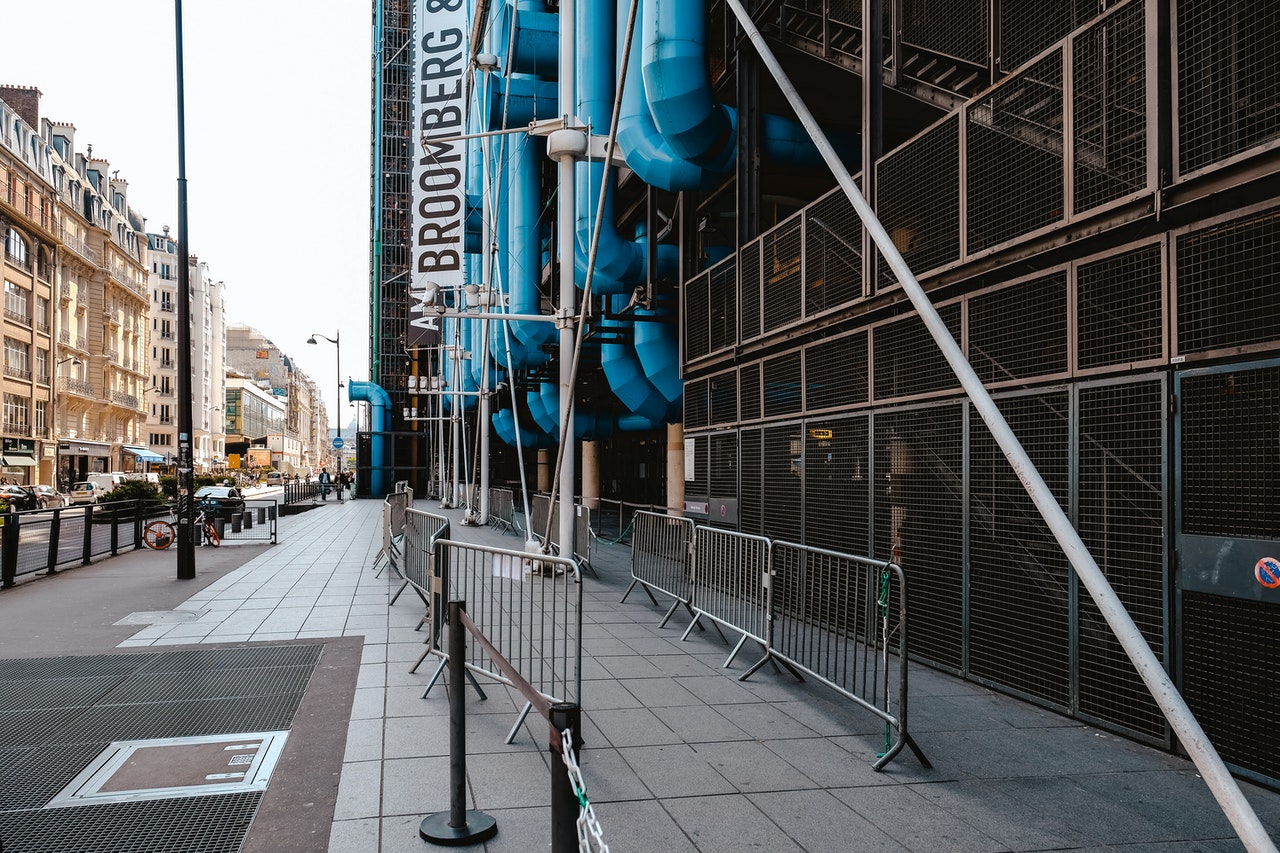 For nearly all visitors and tourists, the “Georges Pompidou National Centre of Art and Culture” is today, simply, the Beaubourg.

Situated between Rue Rambuteau and Rue Saint-Merri and between Rue St Martin and Rue Renard, the Beaubourg, with its audacious architecture, is now a part of our culture and civilization. In 1969, the then President of the Republic, Georges Pompidou, decided to create an important cultural centre in the area known as the “plateau Beaubourg”.

An international call to tender was announced and 49 countries participated with 681 projects: the project of Renzo Piano and Richard Rogers was accepted.

Building began in April 1972 and the centre was opened by Giscard d’Estaing on the 31st January 1977. The building, an “urban machine”, as it has often been described, occupies an area of one hundred metres square. With a revolutionary idea, all the structures normally situated inside a building such as escalators, lifts, safety exits and vertical canalizations, here have been situated on the outside.

This idea of the general evolution of spaces is continued on the inside: every expression of contemporary art is a part of our lives and should be accessible to everyone at any time. The Beaubourg is not intended to be a museum with works of art but instead a place for meeting and exchanging ideas between artists and the public, the public and the things, where everyone can freely move around and approach the principal expressions of contemporary art and culture.

Some curious pieces of information: the Beaubourg is higher and longer than the Parthenon of the Athens Acropolis (it is in fact 42 metres high and 166 metres long); it weighs 15.000 tons of steel compared with the 7.000 tons of iron in the Eiffel Tower; each external pipeline is painted a different colour because each colour corresponds to a different function: blue corresponds to the climatization plant, yellow the electrical installation, red the circulation and green the water circuits.

The various departments in the Beaubourg are also indicated by different colours:

THE NATIONAL MUSEUM OF MODERN ART

This Museum occupies the top three floors of the Pompidou Centre and contains works from the National Centre of Contemporary Arts as well as those previously exhibited in the Avenue President Wilson Museum.

The new internal architecture of the collections was designed by the Italian architect, Gae Aulenti.

This Museum features the most significant works of the 20th century: at the entrance there is H. Rousseau’s Snake Charmer and works by Kandinsky and Picasso.

There follow rooms dedicated to the groups of “Fauves” (works by Derain, Vlaminck, Dufy and Matisse) and Germain painters of the “Die Brucke” group, including Kirchner and Emil Nolde. Cubism is documented in particular by Picasso (the Guitarist, Nature Morte a la tete Antique, Minotaur, from 1927, the famous Harlequin, 1923), Braque (Woman with Mandolin), Giorgio Morandi (various Still Lifes) and Juan Gris. There is an important Italian (Carra, Magnelli, Severini and De Chirico) and Russian representation (pictures and sculptures by Archipenko).

There are many works by Kandinsky and Matisse: of Kandinsky’s works we mention the Park of Saint-Cloud, Old City, Improvisation no. 14, Blue Sky, Mutual Agreement, Accent in Pink; there are numerous bronzes by Matisse: Interior with Goldfish Bowl, Violinist at the Window, Grande Interieur Rouge, Still Life with Magnolia, Interior at Nice. There are many works by Fernand Leger, including the monumental Composition with Two Parrots, which he began in 1933 and finished in 1939.

Then there is Piet Mondrian and his Compositions; Paul Klee with Florentine Villas and Mask of a Young Idol; Marc Chagall with the Soul of the City and The War; Clowns by Georges Rouault. Surrealism is represented by Max Ernst, Rene Magritte, Y. Tanguy, Salvador Dali, Picabia, Miro and Andre Breton. Finally there is contemporary art with works by Dubuffet, Jackson Pollock, Mark Rothko, Lucio Fontana, the exponents of American Pop Art (Claes Oldenburg, Roy Lichtenstein, Andy Warhol), Op Art (with kinetic works by Vasarely and Soto), the Cobra movement, works by Francis Bacon, right up to the latest exponents of New Realism and Hyperrealism.

Situated between Place Georges Pompidou and Rue du Cloitre Sainte-Merri, the Place Igor Stravinsky has recently been inaugurated. It is almost completely taken up by an original, colourful and amusing fountain by Tinguely, the kinetic sculptor belonging to the Nouveau Realisme group, officially formed in Paris on the 27th October 1960.