The “Charles Bridge” is one of Prague’s symbols par excellence. It joins the historic quarters of Stare Mesto and Mala Strana. Work was begun on its construction at the time of Charles IV ( latter half of the 14th century ) by P. Parler and J. Ottl, and it was completed in the early 15th century, under the reign of Wenceslas IV. The strain of the centuries and the destructive floods of the Vltava have certainly put the Charles Bridge to the test, and in fact, two of its arches had to be rebuilt in 1890.

The Charles Bridge – Karluv Most

The pedestrian bridge, which affords fantastic views of the city, is 516m long, 10m wide and is supported by 16 pillars. It is watched over by mighty towers at both ends, and the whole bridge was once part of the defensive works of Prague. Its monumental Gothic feel is softened and enlivened by what we might call a genuine open-air sculpture gallery: there are as many as 30 statues and groups of sculptures on show, contributing to the magical atmosphere of Prague and the splendid views. In 1657, following the restoration of a bronze Crucifix which had stood here since the 14th century, statues and sculptural groups began to be placed along the parapet of the bridge: 26 of them between 1706 and 1714. Among the artists who have displayed their talents here are J. Brokoff and sons. M.B. Braun, and Josef and Emanuel Max. The group of St Cyril and St Methodius was sculpted in 1928 by K. Dvorak. Most of the statues have been replaced with copies since the originals are made of sandstone which is easily damaged by pollution.

These are therefore kept in the Lapidarium of the National Museum. The Statue of St Luitgard is the most valuable one, while the figure of St Philip Benizzi is the only work in marble. The only bronze statue is that of St John Nepomuk, situated at the center of the bridge. It is a 17th-century work based on models by M. Rauchmüller and J. Berkoff. A relief carving between the sixth and seventh pillars shows where the saint was hurled into the river. A Hebrew epigraph, close to the Crucifixion Group, commemorates the sacrilegious act of a Jewish blasphemer ( 1696 ). A scroll situated below the 19th-century Statue of St Francis Seraphicus bears the verses of Psalm 90/11: ” God will put his angels in charge of you to protect you wherever you go “. Near to the bridge ( on Kampa Island ) is the Roland Column, a 19th-century copy of the 16th-century original. The bridge is one of the focal points of tourist Prague: it is forever crowded with a babel of visitors, while artists, vendors, and craftsmen offer their work for sale in an atmosphere reminiscent of the Parisian Rive Gauche.

The Towers of Mala Strana mark the end of the bridge where it meets the quarter of the same name. The lower of the two towers, from the late 12th century, formed part of the old Judith Bridge. Some architectural and ornamental reconstruction work was carried out on it towards the end of the 16th century. The higher tower, built in the second half of the 15th century, was ordered by Jiri of Podebrad and took the place of an old Romanesque tower.

The Tower of Stare Mesto stands to watch over the entrance to the bridge on the right bank of the Vltava, where the quarter of the same name lies. Its construction was begun in the late 14th century and completed at the time of Wenceslas IV, under the direction of P. Parler. The elegant beauty of this Gothic tower is magnified by the wealth of sculptures and statues which decorate it. These are considered to represent some of the finest examples of 14th-century Gothic sculpture in Bohemia ( they include coats of arms, heraldic emblems, figures of saints, sovereigns, and patrons of Bohemia ). The Gothic paintings were restored in the 19th century, as was the whole tower which was given the roof we see today.

This island, mostly given over to parkland, stretches between the two bridges, Most Legii and Manesuv most. The Certovka, a branch of the Vltava which leads off to the left of the main course of the river, separates Kampa Island from the picturesque quarter of Mala Strana. During Medieval times the waters of this branch of the Vltava fed several watermills. To the west the Karluv most rests on the island, and looking south from the bridge along the Certovka the wheel of an old mill can be seen; to the north, the stream runs through the charming area known as the ‘ Venice of Prague ‘, with its characteristic canals and picturesque houses.

WALKTHROUGH PRAGUE WITH LUNCH ON BOAT

The tour starts with an 1. 5 hour long walk through the historical centre of Prague where you’ ll see the Old Town Square with its Astronomical Clock and through the Parizska Street, you’ ll get to the Vltava River to board the boat and have your lunch. During the boat cruise you’ ll have the opportunity to see Prague from a completely different perspective. You’ ll see the Prague Castle, the Rudolfinum concert hall, the Charles’ Bridge, the National Theater and many other important sights. The tour ends at the Cechuv Bridge.

It really doesn’t matter whether Prague in the evening is lit up by a glowing sun or by a fresh coat of snow. Its curving streets have a wonderful, one – of – a – kind magic. It’ s not for nothing that film crews from all over the world come to this city whose timeless corners breathe centuries of history. This is why we have prepared for you also a walk through Prague at night. You’ ll walk through the Old Town across the Charles Bridge to legendary Kampa island, to end the tour in the Lesser Town. We’ ll take you back to your hotel by bus. We wish you a night of magical and mystical experience.

We can guarantee you that Prague is beautiful from the Vltava in any kind of weather, in both winter and summer. During the one – hour boat ride, your guide will tell you about all of the monuments you will see; the Prague Castle with the St. Vitus Cathedral, the Charles Bridge, the Old Town, the Lesser Town, and many more. At the end of the trip you’ ll take a short walk down Parizska Street to the Old Town Square, where the tour ends.

Taking a Break in Everyday Prague In the heart of the Czech Republic, Prague is “the golden city of a hundred spires.” This vibrant Baroque capital escaped the bombs of last century’s wars, so it remains one of Europe’s best-preserved cities. It’s the ideal springboard for travelers new to eastern Europe – an accessible city… 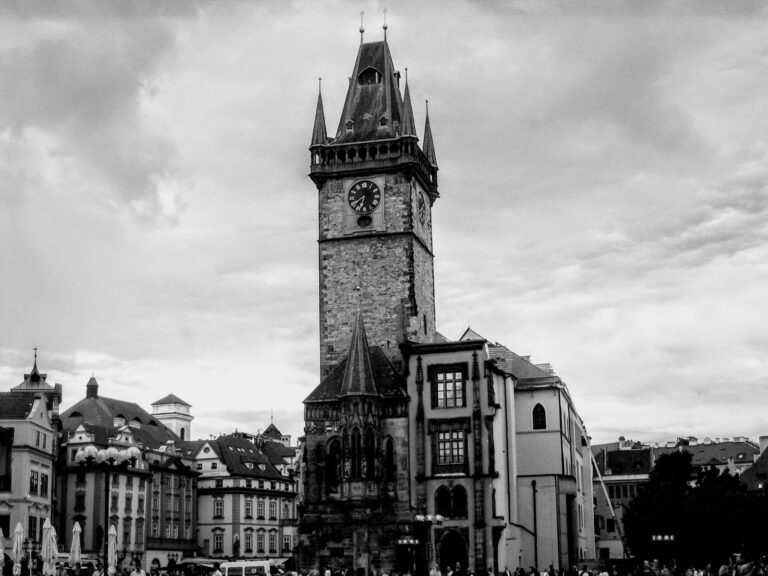 PRAGUE – The Magical City, The Golden City, The City of a Hundred Towers, the Paris of the East These are just some of the most common definitions adopted by tourist publications when talking about Prague, a city of around 1,300,000 inhabitants and, since 1st January 1993, the capital of lite Czech Republic, as well…