This group of islands has been called the Dodecanese ( 12 islands ) because the main ones are twelve in number: Patmos, Kalymnos, Leros, Kos, Nisyros, Astypalaea, Tilos, Symi, Chalki, Karpathos, Kassos, Rhodes, and Kastellorizo. In the next several articles, we will describe all of them, one by one.

Rhodes with its constant sunshine, its antiquities, and its incomparable landscapes, make it one of the best-known tourist islands in the world.
In the Classical period, Rhodes was a powerful and rich island, exerting an influence far and wide. Its second great period was when the island was occupied by the Knights of the Order of Jerusalem ( 1309-1522 ).
In 1522 Rhodes was conquered by the Turks, followed by the Italians in 1912. In 1947 Rhodes and the other islands of the Dodecanese were incorporated into Greece.

The capital town Rhodes has a quarter of old houses, narrow streets, and small stores under the medieval walls, as well as a new part with modern buildings, hotels, shops, and facilities. In the town, the visitor should not miss the Archaeological Museum containing unique pieces of Rhodean art; the Palace of the Grand Master; the walls of the Castle; the Street of the Knights; and, on the acropolis of ancient Rhodes, the ruins of temples, a theater, a gymnasium, a stadium, and other buildings.

The most interesting places to visit are Rhodini Park, Kallithea, the Valley of the Butterflies, the 7 Springs, Philerimos, Camiros, and the unparalleled Lindos.
Rhodini Park ( 3 km south of the town ) is a pleasant place with fountains, ponds, flowers, and trees.

The Valley of Petaloudes ( Butterflies ), 26 km from the town, near the village of Kalamiona, offers the magnificent sight of thousands of butterflies rising in clouds from trees and bushes in June, July, and August. Seven Springs is a beautiful resort with a lake, little waterfalls, and many plane trees.
Mount Philerimos ( 15 km south-west of the town ) is an interesting spot with a Byzantine monastery and the remains of a Temple of Athena and the ancient city of Ialissos.

On the slopes of a hill, some 36 km southwest of the town is situated Kamiros, the so-called “Pompeii of Rhodes”. One can see there the remains of the third of the most ancient towns of the island.
Lindos ( 56 km from the town ) combines a picturesque village with lovely beaches under the remains of the impressive ancient acropolis and fortifications built by the Knights and the Turks.

Southeast of Thessalonike lies the peninsula of Chalkidiki. Its three long “fingers” – Cassandra, Sithonia, and Athos – stretch out across the Aegean.The peninsula has been richly endowed by Nature: along the delicate tracery of the coastline a string of enchanting coves and bays alternate with rocky headlands and beaches of golden sand, while groves…

Archaeological Museum, XANO ( YMCA of Thessalonike ) Square, is on 6 Manoli Andronikou Street.Among its exhibits are architectural fragments from the Archaic temple of Therme, finds from the excavation at Sindos, the amazing and unique treasures from the royal tombs of Vergina, and finds from the tombs at Derveni and the areas around Thessaloniki,… 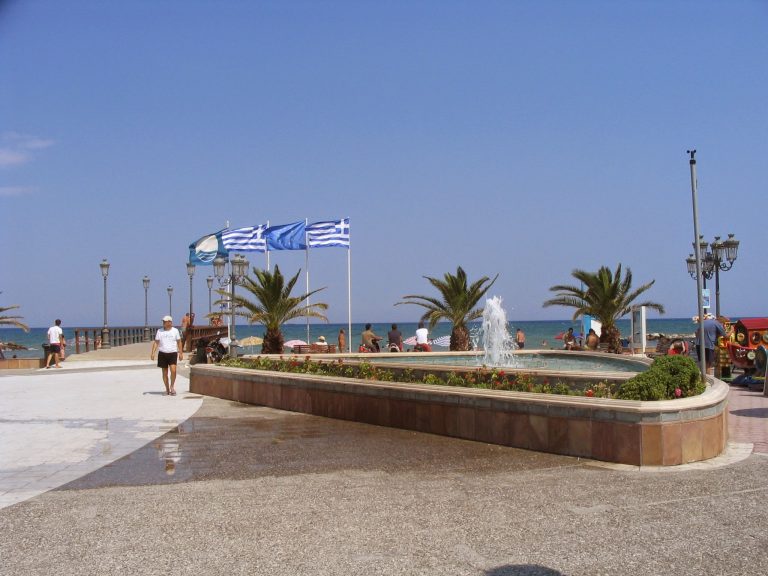 Olympus Riviera Pieria Greece Olympus Riviera, in Pieria, is the Greek Riviera. Below imposing Mount Olympus and the evergreen Pieria Mountains, its serenity unfolds to the crystal blue waters of the Aegean Sea. It is the land of Mythology, the Gods and the Muses, the cradle of civilization, with a strong cultural past. It is…

Climate and Temperature Crete is the largest of the Greek islands. It is blessed with a turquoise blue sea and a wonderful climate. The geographical location of Crete and the climate have created an amazing diversity of flowers, plants, wildlife, and trees. The climate of Crete is a mild Mediterranean climate with temperatures around 12 C…